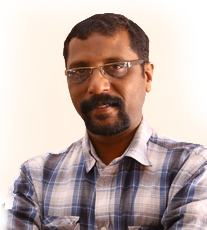 On Vijayadashami in 1989 October 10th he took his first step towards Mural Painting with the blessings of his guru, Sri.Mammyoor krishnankutty Nair from Gruruvayoor Mural Painting Institute. Saju Thuruthil spent 5 dedicated years working hard in understand and studying that his guru taught from precious palm leaves in Gurukula Paintings. He compares his learning’s as a silent prayer that he completes in front of Goddess Saraswathi - Goddess of knowledge.

These 5 years molded the youngster to become a highly dedicated person in his career. He enjoyed each moment he spent in Gurukulam because it was a peaceful and disciplined place of study. Guruvayoor Devaswam painting Institute was a place where a student can learn and understand about Ajantha Cave Paintings, Ellora Paintings, Primitive Paintings, Dhyana Sloka Paintings, and Temple Paintings etc. Sri Mammyoor had great confidence in Saju’s knowledge about Mural Painting so he delegated all the job’s to Saju to complete the Mural Paintings even though he was a student.

Saju had extra talent compared to other students. After studies he started to accompany his guru for mural painting works. All these years Saju attempted to take motifs from traditional mural Painting and create some new development in Kerala Mural Painting. It was his enthusiasm that lead him to experiment, experience and create his own style in Mural paintings. The immense pleasure and enthusiasm that he got from mural painting became his blood and breath.

When he was a student in gurukulam at 23, he was anxious about his future and was uncertain about the future of mural art and also his future based on Mural paintings. Sri.Mammyoor, based on his life experience assured him that he can reach heights from this Gurukula Paintings. This inspired the young 23 year old to take Mural Painting as a profession and he was confident that he can conquer mountain of Mural Paintings.

When he finished his studies he was a well-known artist in kerala Mural Painting and South Indian Painting. He felt that it was the blessings of the goddess that enabled him to create magic with his hands.

According to Saju Thuruthil every students must acquire techniques and Secret of Wisdom directly from guru’s face in Gurukulam. Sri Mammiyoor is a knowledge of sea which accrued from ancient thaliyola and books. The knowledge blend with practical experience took him a long way to participate and finish Guruvayoor Temple Mural. Traditional methods of colors making in Kerala paintings with Vegetable Colour, preparation of wall before painting etc, are practical knowledge which can be got from an experienced person. Saju strongly believed that all the extravagances he gained from art was blessing of Saraswati Devi.

When he finished his studies in Mural paintings at young age he happily dedicated his life for Chumar chithrangal, eventually that dedication leads to the development of Kerala paintings. He always took part in initiatives undertaken by authority which enabled the public enjoy Kerala Mural paintings. He consider his life mission is to do his maximum for the development of Mural Art.

His dedication towards Kerala Mural Painting is appreciable and will be memorable to the younger generations.

It will be no wonder if we see one of his works in an art gallery or restaurant in United Kingdom or USA .His traditional and modern works has travelled to 33 countries through his admirers and has decorated the art galleries and private collections. It is appreciable that he took initiative to spread Kerala culture and Mural Painting all over the world.

He is humble about his rare aptitude and always happy to lead and guide people who adore Mural Painting. Saju Thuruthil directly and indirectly spreading his divine creativity to others too. Every year during Vijayadashami day he hold students hand to lead them the same way in which he traveled because it is a memorable day in his life. He is confident that he will do his maximum to create a desire in younger new generation towards Natural Colour paintings.

One of his admirer has written down in the comment book in an exhibition that “Your life is blessed with Saraswati Devi. Please spread it to our life as well”.